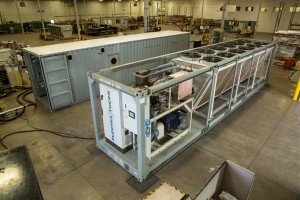 ElectraTherm, a leader in distributed, waste heat to power generation, partnered with the U.S. Department of Defense to commission the first fully-integrated stationary engine and waste heat to power generator. ElectraTherm’s Power+ Generator was integrated with a Cummins KTA-50 1.1 megawatt engine to increase fuel efficiency, in addition to acting as a total radiator replacement . The Power+ Generator displaces the radiator’s capital cost and parasitic load, generating additional power and marking the first “radiator with a payback.”

ElectraTherm utilizes Organic Rankine Cycle (ORC) and proprietary technologies to generate power from heat as low as 70°. With the typical engine running at about 35% efficiency, there is considerable waste heat between the jacket water and the exhaust. By acting as the radiator for the engine, ORC technology benefits include additional power generation, increased efficiency and reduced cooling loads. The elimination of radiator capital costs offsets up to 20% of the entire ORC project costs, delivering a payback of three years or less for diesel or heavy fuel oil-fired gensets.

Watch a video on how it works here.

ElectraTherm, Cummins Rocky Mountain and the Mobile Utilities Support Equipment (MUSE), a branch of the Navy, commissioned the unit at ElectraTherm’s headquarters in Reno, Nevada where the machine went through extensive testing, optimization and verification of performance by Southern Research Institute. The unit will ship to the military base at Guantanamo Bay for high efficiency prime power generation. Diesel & Gas Turbine Worldwide Magazine featured an article on the technology available here.

“We were very pleased with the Power+ Generator’s performance in this joint demonstration project with the Environmental Security Technology Certification Program. Fuel costs and the transportation of that fuel are critical within the DoD and a 10% decrease in fuel usage cannot be understated. We were especially pleased with the simple installation and operation of the Power+.”
– Juan Aragon, Navy MUSE Group