What is a POWER+ GENERATOR?

The ElectraTherm POWER+ GENERATOR™ is an ORC based heat-to-power generating system that captures waste heat to generate up to 120kWe of fuel-free, emission-free electricity. ElectraTherm’s patented technology allows for the sustainable production of electricity as long as an appropriate thermal heat source is available (from 77°C-132°C at a flow rate of 3.2 l/s-22.1 l/s).

Appropriate waste energy sources for the POWER+ are small, distributed hot water sources such as stationary engine jacket water, biomass boilers, solar thermal and co-produced (or geothermal) fluids. The diagram below shows examples of different heating and cooling sources that can be used with the POWER+.

The required conditions for POWER+ operation, in both Power Metric and Power US units, are provided in the tables below.

Please note, the POWER+ requires the waste heat input to be in a liquid hot water, a glycol solution, or as saturated steam.

Important Components in the POWER+ GENERATOR™

A few noteworthy components in the POWER+ are the twin screw expander, induction generator, and the non-toxic system working fluid.

A significant advantage of the twin screw expander is the ability to operate in two phase, or “wet” conditions.  This two phase operation means that the refrigerant does not have to be 100% vapor. The ability to operate in a range of working fluid conditions from superheat to wet vapor allows the POWER+ to follow variable heat loads and produce power over a wide range of input conditions. This is particularly important when load following internal combustion engines through different speed and load conditions.

An induction generator is electro-mechanically similar to an induction motor. In the case of the POWER+ Generator, the induction generator is based on a 70-100 horsepower (about 50-75 kW) squirrel cage motor with some optimizations to the internal construction to make it more efficient as a generator. In the event of a loss of grid, the unit will automatically shut down, and cannot be re-started until line conditions return to normal.

The working fluid that is used in the POWER+ is the compound HFC-245fa (1,1,1,3,3 pentafluoropropane). HFC-245fa is an EPA-approved member of the hydro fluorocarbon (HFC) family of refrigerants, permitted under the Montreal Protocol. This non-flammable, low-toxicity,  environmentally-safe fluid boils at approximately 15.5°C at atmospheric pressure. HFC-245fa is ozone safe and generally safe to handle. The oil used for lubrication is contained in the working fluid as part of ElectraTherm’s proprietary in-process lubrication.

POWER+ Generator ORC system operation can be broken down into five steps, which are represented in the diagram below. These steps are: 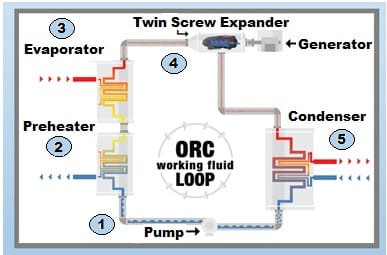 Heat Sources for the POWER+ GENERATOR™

The POWER+ can utilize low grade waste heat (temperatures between 77°C-122°C) from hot water sources. Waste heat from exhaust gases, thermal oils, and other liquid heat sources may also be used with deployment of a secondary heat exchange loop.

Site conditions, such as the system delta T (which is affected by ambient air temperature and temperature of heating/ cooling water) and available thermal heat all affect ORC performance.

The POWER+ Generator’s location influences the ambient air temperature conditions. In locations with hot climates, such as Africa and the Equator, POWER+ net power output will be lower than net power outputs produced by machines that are installed in cold climate locations, such as Northern Europe, even at the same hot water input temperature. This discrepancy is due to a lower system delta T (difference between the hot water input and condensing temperature) in hot climates versus that in cold climates.