The POWER+ GENERATOR is well-suited to using low grade heat generated from a variety of applications. These applications include solar thermal, biomass (biogas) boilers, internal combustion engines (ICE), process heat, geothermal/co-produced fluids, and oil & gas heat recovery. The figures provided below are demonstrative in nature, and do not represent all possible configurations.

Given that most internal combustion engines are only 30-40% efficient thermally means that of all the thermal heat put into an engine through fuel input, 30-40% of the fuel input becomes mechanical work, and the other 60-70% of the fuel input leaves the engine as waste heat through the jacket water cooling circuit, the exhaust stack and other cooling circuits. Capturing the heat from the jacket water circuit, the exhaust or combining the exhaust heat with the jacket water heat are easy options for converting the waste heat from an ICE into electricity as well as providing other local heating requirements. When fuel costs are high, and the ICE is used for electrical production, the ElectraTherm POWER+ will save fuel costs by allowing the engine to operate at a lower fuel input rate to maintain the same electrical output as supplemented by the POWER+ GENERATOR. Also, installing a POWER+ reduces the amount of heat that the radiator previously had to reject. A reduction in heat rejected at the radiator is equal to reduced electrical consumption by the radiator. Not only is the POWER+ producing electricity from the jacket water heat, but the effective net output of the entire engine increases because of the reduced electrical load on the radiator.

The waste heat from the engine jacket water can be combined with the waste heat going out the exhaust. Heat is added to the water in the engine, raising the temperature. The heated water then passes through an exhaust gas heat exchanger, where heat is transferred from the high temperature exhaust into the heated water, increasing the temperature more. The waste heat rejection for this example would include the POWER+ GENERATOR, building heating and anaerobic digester loads, as well a radiator to remove excess heat if necessary. The diagram on the next page shows the hot water heat source flow using both the jacket water heat and exhaust gas heat. It should be noted that not all of the waste heat in the exhaust gas can be recovered because the exiting gas must not drop below the condensation point. If too much heat is removed from the exhaust gas, an acidic condensate is produced that will rapidly corrode the heat exchanger and associated piping. 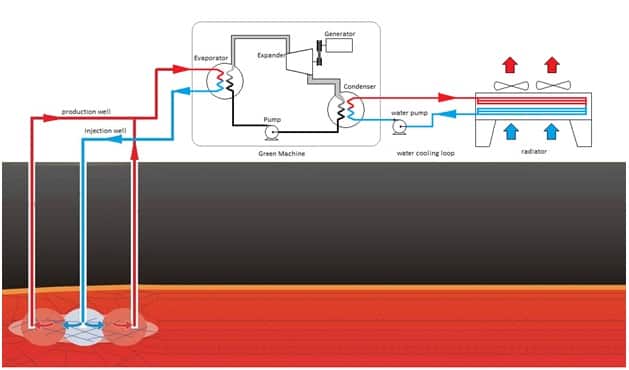 Many oil wells also produce hot water, like the geothermal sites. The hot water is extracted from the ground and re-injected after the heat is removed.

Solar thermal arrays will need thermal storage and have limited hours of operation depending on daylight hours. If the solar thermal array uses a medium other than a water-glycol mix, a heat exchanger system will be needed. 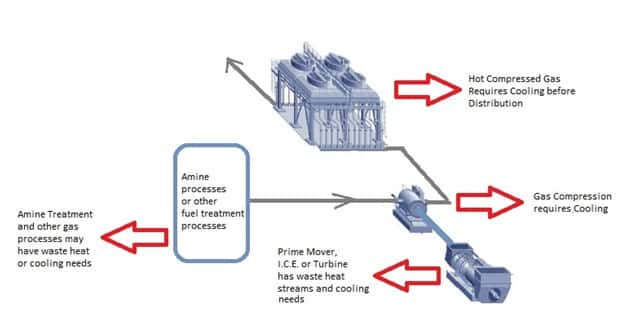 Refining processes, gas compression and other industrial processes create a lot of waste heat. As shown above, a typical gas compression station has many sources of heat, and some of those sources of heat need to be cooled, so there is a double benefit of both producing electrical power from the heat and reducing the cooling power loads on the existing system.