Biomass in the UK

ElectraTherm runs its largest Organic Rankine cycle (ORC) model, the 6500 POWER+ GENERATOR, at a garden centre in the United Kingdom. Commissioned in early 2016, the site utilizes biomass to generate clean electricity. The POWER+ also acts as a Combined Heat & Power (CHP) unit producing both electricity and useful thermal for heating the garden centre, as well as drying the biomass to sell for profit.

At the garden centre, ElectraTherm utilizes ORC and proprietary technologies to generate power from low temperature heat at 119°C. The site uses wood chips to fuel an Ariterm Bio Boiler. The boiler heats water to run the Power+ Generator, and produces clean electricity that is sold back to the utility at an incentivized rate. The ORC condensing is provided by a distributed radiator/fan system that also serves as heating for the entire garden centre, increasing the efficiency of the system as a whole. Two 30 kWh plate heat exchangers have also been incorporated into the district heating system along with existing radiators to supply hot water and heat the office space.

“The addition of the Power+ Generator to the Garden Centre increases 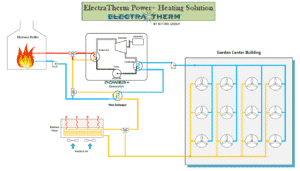 overall site efficiency, and reduces our use of fossil fuels and their ever increasing costs,” said Sam Ainscow, Manager of Summerseat & Bradley Fold Garden Centre. “ORC technology is critical to maximizing the site’s operations, and ElectraTherm is the most proven, robust ORC technology available.”

ElectraTherm’s Power+ Generator is available in two different sizes. The 4400B generates up to 75kWe, and the 6500.1 can generate up to 120kWe. ElectraTherm’s ORC technology captures low temperature waste heat at 77-132°C to generate fuel-free, emission-free power.

Product development is ongoing to raise input temperatures up to 150C/f and condensing temperatures from the ORC up to 85C/f.  This will allow greater outputs from sources with higher thermal input and will allow beneficial use of the ORC condensing water after power production, greatly enhancing CHP fit and efficiencies.